The Botticelli Caper is published!

The third mystery in my Flora Garibaldi Art History series, The Botticelli Caper, just appeared for sale on Amazon (as of September 1), in both trade paperback and ebook.
During my last trip to Italy with my daughter Emily, we visited the Uffizi in Florence. While Emily gazed at famous paintings and sculpture, I was busy studying unmarked doorways, security cameras, and guard placement to further the following plot:

“Conservator Flora Garibaldi discovers that several paintings in Florence’s Uffizi Gallery have been replaced by clever forgeries. Where are the original artworks, and who’s in charge of the smuggling operation? Flora’s efforts to help the police make her the target of a criminal mastermind and murderer.”

How could this happen? Today the Uffizi is a modern, well-protected museum. However, I deliberately set my story about ten years ago when the old palace that houses the Uffizi was undergoing the latest in a long series of renovations (security systems being revamped, lots of workmen coming and going, construction and packing materials always underfoot, etc.). When you also know that the Uffizi is connected by a tunnel to another palace on its north side and (via a famous bridge) to another palace on its south side, my plot becomes more plausible.

My other book news is the production of my novel Burnt Siena (the first Flora mystery) as an audiobook. Authors who retain their audio rights can produce their own audio editions through Audible/ACX (the audiobook wing of Amazon). Thanks to an amazing narrator, Carrie Coello, the process has been both fun and enlightening. Here is the audio cover (created by graphic designer Ben Coello): 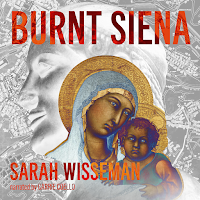 The audiobook will be available on Amazon by mid-September.
Posted by Sarah Wisseman at 9:58 AM