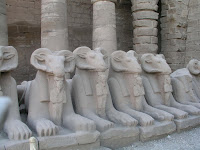 "Since I’m an archaeologist with a special interest in mummies, Egypt has always been on my bucket list. Recently my husband Charlie and I took a reasonably priced Globus tour (Cairo plus a standard 4-night Nile cruise) that met all my expectations.

You have to go there, because no video can do justice to the sheer size of the monuments or the overwhelming impression that the distant past lives cheek by jowl with the 21st century.

At Giza, you face one direction and view the mesmerizing Great Pyramid of Khufu and endless sand. You turn around, and there is modern Cairo, sneaking up on the archaeological site like a metastasizing tumor. Cairo traffic is just as my Lonely Planet guidebook described, “like the chariot race in the movie version of Ben Hur, but without the chariots.” And at night, drivers don’t turn on their headlights until they are about to do something suicidal, like veer across three lanes of traffic.

Away from Cairo, the shores of the Nile look essentially as they did five thousand years ago. Small thatched huts serve as quarters for animals and herdsmen, and fishermen travel in feluccas (sailboats) while beating the water to attract fish. If you take a sunset sail, the sailors will teach you Egyptian songs while they maneuver the boat into the middle of the Nile. Then, when you are unable to leave, they unveil their “genuine” jewelry for sale. This experience prompted my husband to whisper to me, “Don’t buy from a Nubian in the dark.”

The farther south you go, the more aggressive some of the vendors are. They set up souks (markets) between the parking lots and major archaeological sites so that tourists have to run a gauntlet of shopping “opportunities.” When you find yourself draped with unwanted merchandise, with hands tugging at your shirt, the word “imshee!” (get lost!) is very useful.

The highlight of the trip for me was Luxor, the ancient city of Thebes. This is the jumping off point for trips to the Valleys of the Kings and Queens, the Temple of Luxor, Karnak, and the giant temple of Queen Hatshepsut (your guide will teach you to say, “hat-cheap-suit”). The landscape here is stark but colorful, with sandstone rocks in multiple shades of tan, cream, gold, and mauve. Here you can also see the Colossi of Memnon, immense statues whose quartzite was shown by Illinois geologists to have originated near Cairo.

Karnak is full of wonders, room after room of obelisks, paved courtyards, and statues of the lioness goddess, Sekhmet. And if you turn at just the right angle, you can see the golden arches of a McDonald’s looming in the distance.

Avoid uncooked vegetables or you’ll get the Thutmosis Trots. But go see Egypt, before Cairo and the desert swallow up the Great Sphinx and the Pyramids…

Champaign resident Sarah Wisseman is the author of several archaeological mysteries, including The House of the Sphinx (www.sarahwisseman.com)."

(This article recently appeared in The News Gazette of Champaign-Urbana IL. Photos by C. Wisseman)
Posted by Sarah Wisseman at 6:14 PM No comments: