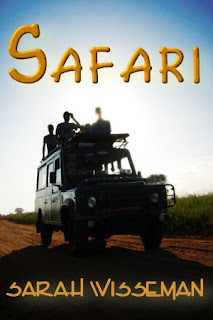 Exactly seven years ago, my husband Charlie and I set off on a safari of Kenya and Tanzania to celebrate our 25th anniversary. We quickly discovered that a trip in a safari vehicle--one with a top that comes off so tourists can take pictures without getting eaten by animals--is a kind of confinement. You're not allowed to walk around, you have to have an iron bladder, and you'd better like your fellow passengers, including the tse tse flies.

The first part of the trip was great--I saw Olduvai Gorge and some of the oldest skulls on the planet lying around loose in the Nairobi museum. We headed south into Tanzania and a guide wrapped a boa constrictor around my neck so Charlie could take a picture of my horrified face. We enjoyed watching lions and flamingos in the Ngorongoro Crater.

Then we had the accident. A tire blew so suddenly that our vehicle tipped over and rolled on a perfectly good road in the Serengeti. One man was thrown out through the open roof and killed instantly. Three others were injured badly enough to end up in hospital, including Charlie.

I was uninjured because I'd found an ancient, tangled seatbelt and put it on. My seatmate, Andy, who was only 11, hung on safely to the driver's seat. We became roommates back in Nairobi after our relatives were hospitalized.

Charlie had 8 broken ribs and a punctured lung. That meant staying in Kenya an extra three weeks until he was well enough to fly. But he was alive--and the man he'd changed places with on the morning of the accident was not.

As we reflected on this, I realized our lives would never be the same. Neither of us would take our marriage--or life itself--for granted again.

But sometimes good things come out of terrible experiences. My husband, a physician, decided to retire early to make mixed media art. I realized it was time to take my fiction-writing seriously and began to work harder on my first novel.

Eventually I wrote a short story "Safari," inspired by the African experience. It conveys some of the experience of traveling with strangers in a small vehicle in an exotic setting--and a different kind of "accident."


To download this story, go to Echelon
Press.
Posted by Sarah Wisseman at 8:19 AM No comments: