Mysteries in Archaeology: The Untold Story of the Iceman 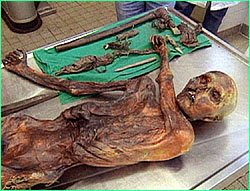 My day job is archaeology, which means I tend to think in layers and I love dirt—both real dirt as in soil, and “dirt” as in good stories about squabbling academics trying to steal each other’s research. Fortunately for me, the archaeological profession is full of multilayered, dirty stories, just like the strata of an excavation.

Take the Iceman, the mummified Neolithic man found in a melting glacier in the Tyrolean Alps. His story has at least three layers: his life in ancient times, his discovery about fifteen years ago, and the saga of the international investigation and border dispute over his body.

When Ötzi, as he is now known, was discovered, his finders thought he was just another dead hiker who’d strayed off the trail in bad weather. Granted, he was a bit leathery-looking, but the folks who ripped him out of the ice and hauled him away (leaving a couple of crucial body parts behind) hadn’t a clue they’d just found one of the most sensational archaeological discoveries of all time.

Ötzi was alive 5,000 years ago. Archaeologists have reconstructed his equipment: he carried a knapsack and a medicine bag, and wore an ingenious set of leggings and a warm, furry cloak. He also had a knife, bows and arrows, and a fire-making kit. But who was he? Where did he come from, and where was he going? Despite the best techniques known to science, many questions about Ötzi remained unanswered.

Archaeologists know the kind of settlement he came from, but not which one. They say that he was probably an important man in Neolithic society, but no one knows his name or family. And everyone thought he died in a blizzard until new X-rays revealed an arrowhead in his shoulder—poor Ötzi was shot from behind. Then someone—the murderer?—removed the arrow and the evidence of the crime was covered up by 5,000 years of glaciers and silence.

The intrigue doesn’t stop there. Scientists and archaeologists from several countries collaborated in the modern studies of the Iceman’s tissues, tattoos, and diet. Did they all get along as well as the news media claimed? Or were some researchers angered as others published their findings in prestigious journals and appeared on Nova? And since the Iceman was found near the border between Austria and Italy, officials from both countries argued over who would ultimately own the mummy and build the museum to display him.

Italy won. A month ago, I visited Ötzi in his new home in the South Tyrol Museum of Archaeology in Bolzano. He’s resting in a special climate-controlled case looking very small and lonely. Although the museum has done a great job of displaying the scientific and archaeological account of his death, a good mystery writer needs to tell the story of his life. Takers, anyone?
Posted by Sarah Wisseman at 3:13 PM 2 comments: